Let’s face it: walking into a conversation among a group of software developers can feel like entering a foreign country. They—and other IT professionals—have a language all their own. While in most cases you might rely upon a polite smile and nod to get you through the parts that are over your head, that’s far from acceptable practice when you’re hiring someone into one of these roles.

Never fear, non-techie recruiter, because we’ve got your pocket dictionary of IT terminology right here! We’ve broken down a range of technical terms by category. Use it as a guide during the tech recruiting process to help determine whether a candidate and their skills are up to snuff, even if their skillset and background is well outside of your wheelhouse.

Front-end developer: A type of computer programmer who develops applications and interfaces that a user interacts, typically using programming languages like HTML, CSS, and JavaScript.

Back-end developer: A type of computer programmer who builds the technology that powers front-end functionality using languages like PHP, Ruby, and Python and tools like MySQL, Oracle, and SQL Server.

Full-stack developer: A developer with skills in both server- and client-side development, i.e. the “full stack” of development capabilities.

UI designer: UI stands for user interface. This designer works to make the user interface of an application simple and functional.

UX designer: UX stands for user experience. This designer works improve the customer experience by increasing ease of use and enjoyability of an application.

System administrator: This person is responsible for the maintenance, operation and reliability of an organization’s computer systems, with a primary focus on servers.

Network administrator: This person is responsible for the reliable operation of an organization’s networks, a.k.a. the means by which multiple computers or applications communicate with one another.

Data architect: Responsible for designing, deploying and managing the means by which an organization’s data is stored, consumed and used.

SRE: Site reliability engineer. This person is responsible for the effective development, maintenance and operation of a software or system.

Agile: An approach to software development in which software is built, deployed and refined in increments rather than all at once. It’s user-centric and encourages swift and flexible response to feedback.

Waterfall: The predecessor of Agile. An approach to software development in which each carefully planned and documented phase must be fully completed before the next phase can begin. Testing and optimization only happen once the full scope of development is complete.

Big data: The term used to describe the massive and ever-growing volume of data that can be used strategically to improve business outcomes.

Cloud computing: The delivery of software and other technical services over the internet (i.e. “the cloud”) versus via a download on a local machine.

Scalability: The ability of a system or network to accommodate growth.

Open source: A term used to describe software whose code is free and available to the public. It is developed by a community for public use rather than by a company for commercial sale.

Framework: A platform for developing software applications. A foundation upon which developers can build programs.

Source code: The instructions that tell a piece of software, website, or application how to work. Source code is written in a programming language like Java, CSS or Ruby.

Database: A collection of information stored and used by software, organized in a way that makes it easily accessible.

HTML: Hypertext Markup Language. This code is used for structuring web pages and the content on them.

CSS: Cascading Style Sheets. This programming language directs the visual aspects of a website, like fonts, colors, and spacing, through a series of style sheets.

JavaScript: A programming language that defines the behavior of a website. It can be used to make elements interactive and controls how HTML and CSS elements function.

Python: This is a scripting language designed to be easy to read and use. It can be used to create dynamic web content, applications, plugins and 2D and 3D imaging.

Ruby: An object-oriented scripting language designed to make programming easier by making assumptions. In other words, you don’t have to start from scratch with each new project. Ruby is the language used in the Ruby on Rails web application framework.

SQL: Structured Query Language. This programming language is used to access and modify information in a database. It’s used in web database development and management.

OOP: Object-oriented programming. A software/application design methodology based around a system of interacting objects. Many commonly used languages are object-oriented, such as Java, Python, C#.

MVC: Model-view controller. A software/application design model based on three connected parts: the model, which manipulates the data, the view, a.k.a. the user interface, and the controller, which controls the change in model.

SOA: Service-oriented architecture. An architecture methodology that aims to help a business efficiently add new services. In SOA, application components work with other components via a network.

API: Application programming interface. A set of commands and functions that allow programmers to interact with an external system. This saves them from having to write code that already exists from scratch. The Windows API, for example, gives developers access to UI and elements like windows and scroll bars so they don’t have to create them independently.

Markup: A type of computer language that uses tags to define various elements. It uses standard words (a.k.a. it’s readable by humans) rather than programming syntax. The two most common examples of markup language are HTML and XML.

Bootstrap: An open-source web development framework used to build websites incorporating HTML, CSS and JavaScript. It was developed by team members at Twitter.

jQuery: An open-source JavaScript library. It helps web developers easily add functionality to their websites by referencing a jQuery JavaScript file, rather than writing the code themselves.

MySQL: An open-source relational database management system based on SQL. It’s most commonly used in web servers, but can be used in dynamic web pages that access information from a database.

Kubernetes: An open-source platform that automates the deployment, scaling, management and maintenance of application containers across a cluster of nodes. It helps developers derive maximum utility from containers and build cloud-native applications that can run anywhere.

Apache: The most popular web server software, released in 1995. It’s open-source and enables a computer to host one or more websites that can be accessed via the internet with a web browser.

Oracle: A relational database management system designed for enterprise grid computing. It helps global enterprises to manage and process information across far-reaching and local networks in a cost-effective way.

AI: Artificial intelligence. A field of study that works to engineer computers that function and reason like humans.

Machine learning: An artificial intelligence skill set involving algorithms that enable a computer to learn and adapt over time rather than following a set of static code.

While this glossary of technical terms is a good starting point, it’s by no means an exhaustive list. For a vast collection of additional IT terminology that’s useful in tech recruiting, check out TechTerms.com. They do a great job breaking down highly technical subject matter into easily digestible definitions for a non-tech audience. If you really want to expand your awareness of technical terms, they also offer a series of quizzes designed to help you hone your knowledge.

Get Help from the Tech Recruiting Experts

Overwhelmed by the stack of IT applications on your desk? Not sure how to select a candidate that will actually be able to accomplish what you need? 4 Corner Resources can help. Our team of information technology staffing professionals can help you sort through the tech speak and identify talent with the experience you need to get the job done.

In today’s business world, your technology can make or break your ability to grow. You need an IT team that’s agile, adaptable and innovative, able to help you apply the latest technology to solve your problems and serve your customers. We’ll deliver top-tier talent with these skills to your door. Contact us to start sourcing qualified, motivated professionals in your field today. 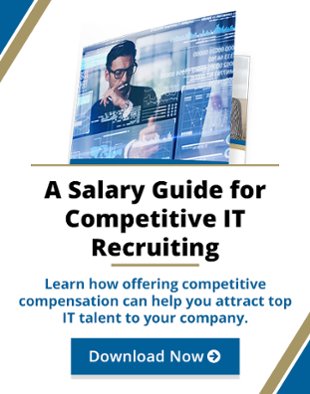 Once a candidate arrives on your website and hits ‘apply,’ it’s tempting to consider the ...

share:
The Best Questions To Ask IT Candidates in an Interview

Conducting an IT job interview presents a unique challenge. You need to cover all the ...

There’s a popular saying floating around in business circles that every company is now a ...

share:
Current Trends and Job Outlook of IT Careers

Technology continues to rapidly evolve and grow, which means the IT growth outlook is stronger ...