Have you been experimenting with computers and technology since you were able to first peck something out on a keyboard? Are you fascinated by computers and think you have a knack for technology?  Are you an open-minded problem solver? If “yes” to any of these, you might have what it takes to be a Software Developer.

Sometimes called Software Engineers (some confusion remains about that title but let’s call it the same thing for this article), or a number of related titles, Software Developers are the creative life force in IT. Software Developers can be generalists in development or they can specialize in areas that are of particular interest to them.

And, there are some great career opportunities for Software Developers, including projected double-digit growth!

So, what does a Software Developer do to be so popular?

This can be a tricky one for many positions because there are so many factors that determine compensation. Salaries in major metropolitan areas are generally on the highest end of the scale.

However, it’s safe to say that the compensation for someone with these responsibilities is generally pretty nice.

It’s interesting to consider this- For every other Position Spotlight that we’ve posted, developing technology is usually included as a hot trend.

Now we’re starting at the source – Software developers create, test, and modify the technology that everyone uses! So, they have to stay at the head of the class in order to determine what will be needed.

Here are a few of the coolest trends in this field:

One great perk, due to the nature of this type of work, is the possibility of working remotely, at least part of the time. That may not be available in every company but it’s quite common in this field and is a great benefit for workers looking for more freedom, self-direction or work-life balance.

Software developers with several years of experience or sought-after skills can, and frequently do, strike out on their own to build an app and sell it on the mass market.

Unlike many other fields, an SD can be highly compensated in a non-management role but there is a definite career path if one so desired:

What Can Set A Candidate Apart?

In addition to a deep knowledge of computer technology gained from many hours (maybe years!) of working with computers, there are some specializations that will help a candidate be very marketable.

It isn’t an exaggeration to say that a good software developer is usually employed in some capacity. Demand is strong and shows little signs of slowing. It only makes sense – we’re in a technology boom where software developers’ expertise is a necessity just to maintain, let alone innovate.

Estimates for growth surpass most other occupations, ranging from 14% to as high as 24%! This is excellent considering that some jobs are considered to have good growth at 10%.

With the right combination of experience, soft and technical skills, and education/certification – it’s a very, very good time to be a Software Developer!

Peter Porebski is the Operations Manager at 4 Corner resources. A graduate of the University of Central Florida he has over 8 years of operations and process improvement experience with 5 being in the Human resources and staffing industry. In previous roles he worked to manage and analyze production flow trends and determine areas of improvement in quality control for the commercial retail industry. His areas of interest include web development, information technology, data analysis and reporting. He lives in Orlando, Florida with his wife and two cats. 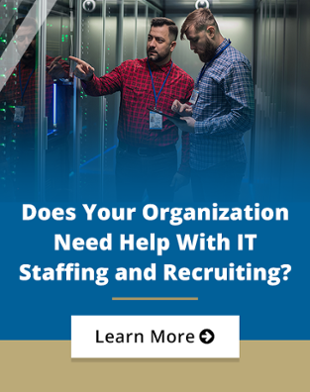 Once a candidate arrives on your website and hits ‘apply,’ it’s tempting to consider the ...

Let’s face it: walking into a conversation among a group of software developers can feel ...

share:
The Best Questions To Ask IT Candidates in an Interview

Conducting an IT job interview presents a unique challenge. You need to cover all the ...

There’s a popular saying floating around in business circles that every company is now a ...