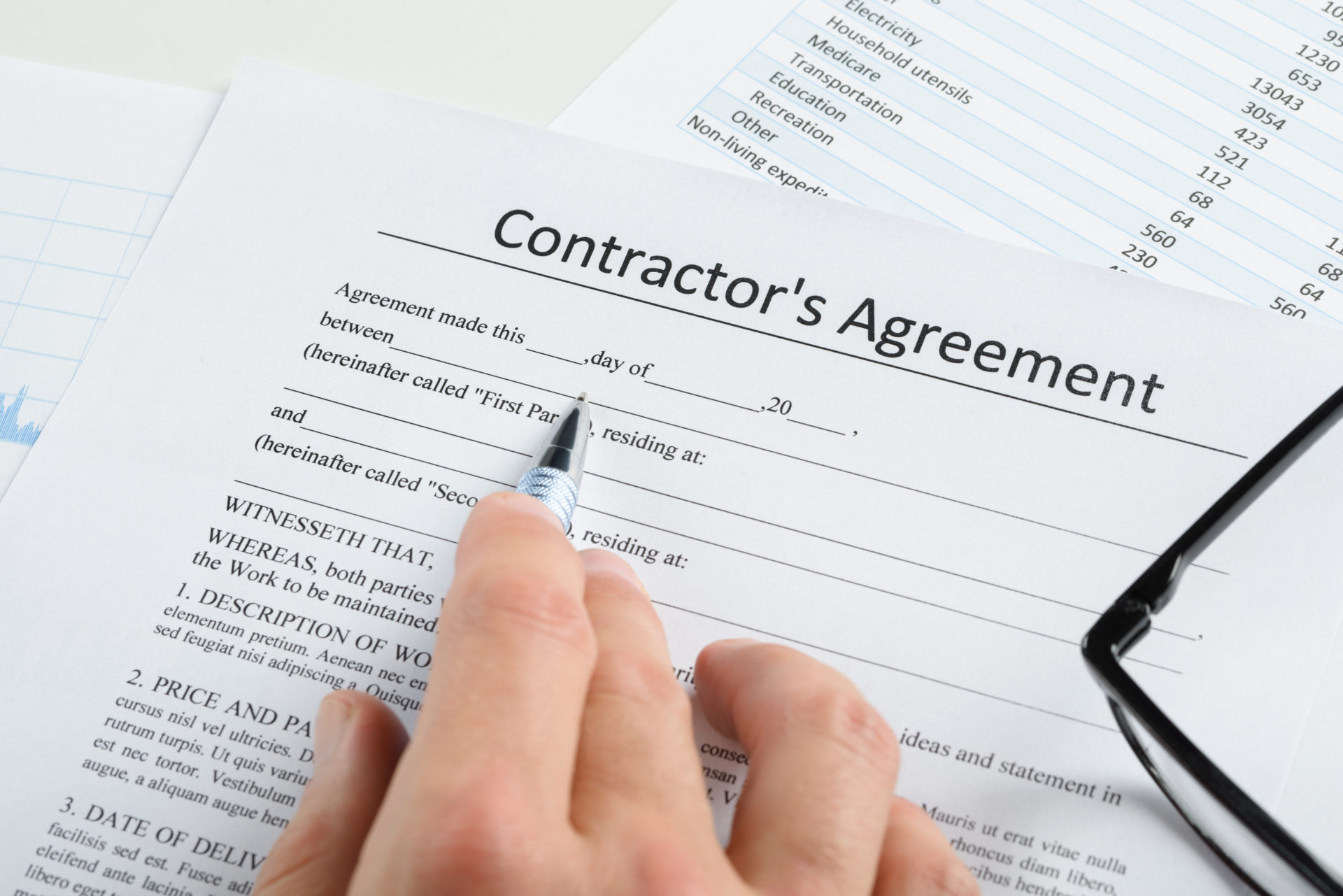 Independent contractor hiring can be an asset in your overall staffing strategy, helping you gain access to niche skills and supplement your workforce at a lower overall cost than hiring additional full-time staffers. If you’ve never hired contract workers, though, one glance at a standard independent contractor agreement can send you running for the hills.

Though they can be lengthy and are generally filled with lots of legal speak, independent contractor agreements are important to have in place before you begin any freelancer relationship. Not only do they ensure both parties have clarity on the work that will be completed, they keep you from being held liable in the unlikely event that the relationship goes south.

First things first: what is an independent contractor agreement?

An independent contractor agreement is a legally binding document signed by a 1099 employee and the company that hires them. It outlines the scope of work and the terms under which that work will be completed, which goes a long way to making sure both parties are on the same page about the project from the start.

For your own legal protection, it’s important to maintain the distinction between your contract workers and your full- and part-time employees. That way, the contract worker can’t come back later and say they didn’t receive certain benefits that are due to employees. The independent contractor agreement is an important tool in making this distinction and ensuring the lines between freelancers and full-time staff members don’t become blurred.

Finally, the agreement lays out expectations for both parties, like the timeline on which the work will be completed and how the contractor will be paid, as well as mapping a path to what actions will be taken should any disputes arise. While it might feel like overkill, especially for smaller projects, having both parties sign an agreement is a show of good faith in your mutual investment in arriving at a quality finished product.  Basically, you’re checking all the boxes for a smooth and successful working relationship with your contractor.

10 Must-Haves in an Independent Contractor Agreement

This is the part of the contract that we touched on a moment ago—the one that specifies that the worker is an independent contractor and not an employee of the company. As such, the contractor will not be eligible for benefits like health insurance and is not entitled to any protections granted by law to employees. You should make clear in this section that the worker is responsible for covering their own taxes—the company will not withhold any taxes on their behalf as it would from the paycheck of a full-time employee.

Depending on the type of services the contractor is providing, you might want to use this section to require that they show proof of liability insurance. This insurance would help cover the costs if, say, the contractor was injured on the job or their work resulted in the company getting sued for a copyright violation.

2. The scope of work to be provided

This should be the easiest part of the independent contractor agreement for you to create; it’s the part where you outline the deliverables you’re expecting to receive from the contractor in exchange for payment.

The deliverable will vary depending on the work being done, but it should be specific, for example, the contractor will deliver one 30-second radio commercial promoting Acme Corporation via a downloadable attachment in mp3 format. If the project is a complex one, it can be helpful to break down the final deliverable into smaller milestones that will be handed over along the way.

In some cases, like one where you’re hiring a marketing consultant to weigh in on a new campaign, there might not be a concrete deliverable. Coming up with the deliverable might be part of the work itself. In this case, you should outline what goals the project is meant to accomplish. For example, the contractor will develop a new creative concept and supporting materials that will generate interest among Acme Corporation’s 25- to 40-year old target audience.

3. The timeline for the work to be completed

In addition to laying out the deliverables that are expected, your contractor agreement should specify the timeline for the work to be done: when you expect the final deliverable as well as any key deadlines along the way.

If your project requires signoffs from multiple parties, be sure to take those into consideration when setting the timeline. For example, if the CMO needs to review the campaign before the contract is wrapped up, be sure to build in a window for feedback and edits before you agree to remit payment.

How and when will the contractor be paid? Common terms for payment include net 30, which means the contractor will be paid within 30 days of submitting their invoice, or end-of-month (EOM) invoicing, in which the contractor will submit an invoice and be paid at the end of every month. Some agreements might involve paying a deposit upfront and the balance upon project completion.
Also, specify who will pay for any expenses incurred as a result of the work, like raw materials, equipment, paperwork filing fees, etc.

5. Obligations the contractor must fulfill

Are there any specific requirements the contractor must comply with in the course of completing the scope of work? For example, do they need any special licenses? Is there any paperwork you’re expecting them to file on your behalf? Can they hire other people underneath them to work on the project? If you have expectations in mind for these items, be sure to explicitly spell them out in the contract.

The nature of contract work often means that contractors have access to confidential or sensitive company information that’s not otherwise accessible to the general public. What are the guidelines around this material? Generally, this section specifies that any confidential information and trade secrets the contractor encounters in the course of their work cannot be downloaded, shared, or used for personal gain in any way.

If you’re new to independent contractor hiring, you might not realize the importance of this section of the contract. It says that any work-related product created in the scope of the contract, as well as the resulting deliverable, is the sole property of the company. This is particularly important in projects that involve, research and development or the creation of creative materials.

In some cases, you might come to an agreement where the contractor retains some ownership of the work, like the right to use it in their portfolio or receive credit if the work is published.

This is an optional clause in your independent contractor agreement that may or may not be necessary depending on the industry you work in.

A non-compete clause says that the contractor cannot work with your direct competitors at the same time they’re working with you, or for a set period of time after the work is completed. It might also bar them from setting up their own competing business in your same industry within a certain time frame.

A non-solicitation clause says the contractor can’t go around you and do business directly with your customers or clients for a certain amount of time after the contract, like six months or a year.

Who can cancel the contract and on what grounds? How much notice must be given, and in what format? A typical termination clause in an independent contractor agreement might read as follows:

Acme Corporation and Contractor shall each retain the right to terminate this agreement at any time, for any or for no reason, upon delivery of three days’ prior written notice to the other party.

Finally, if there are disputes over the contract or the work it entails, how will they be handled? This section should specify which state’s laws will be used to enforce the contract. Typically, this is the state where the company is located, but if the company has multiple locations it might be the state of the home office or headquarters versus the location that’s hiring the contractor.

Do I Need an Attorney?

If all of this legal talk feels over your head, your next question might be, do I need an attorney to hire an independent contractor? The answer is, it depends.

For smaller projects, using a basic independent contractor agreement, like from a downloadable template, may be sufficient. For larger projects, those with longer timelines, high-stakes outcomes, or those that deal with especially sensitive information, it may be worthwhile to have an attorney look it over to make sure everything is in line before you proceed.

Trust the Staffing Experts for Your Independent Contractor Hiring Needs

One way to circumvent the need for independent contractor agreements altogether is by working with a professional staffing agency. We will protect your company and make sure you’re hiring the best candidate for the job.

Start leveraging contract staffing to fulfill your needs today by scheduling your free consultation with us now.