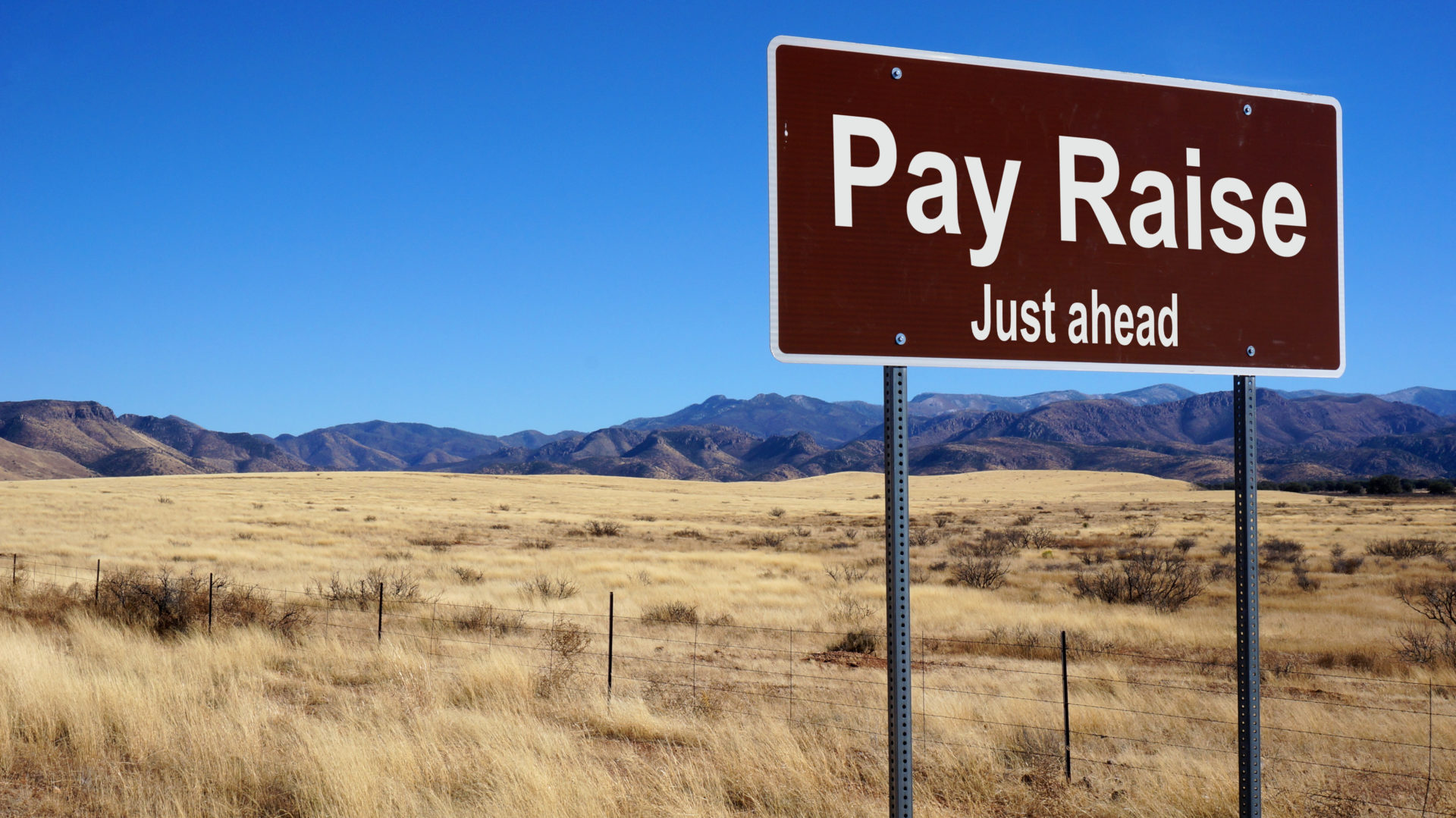 What is the average raise percentage? How often should you get a raise? Most importantly (and perhaps most nerve-wracking), how do you ask for one?

These are questions every employee has asked at some point or another, so if you are wondering about one or more of them, you are not alone. Here, our staffing experts answer your most pressing questions about getting a raise so you can maximize your earnings while making a favorable impression with your boss.

Factors That Influence Getting A Raise

It used to be the norm that working professionals could expect an annual pay raise year after year. Typically this was a set percentage, like 3%, meant to keep employees from jumping ship and help account for rising costs of living due to inflation. However, the days of the guaranteed annual pay raise are, in many industries, a thing of the past.

A 2016 Chicago Tribune article spotlighted the declining trend, noting that more companies were moving to ‘variable pay’ models where employees are given raises or bonuses based on merit and performance rather than the passing of a certain date on the calendar. This was the case for 13% of organizations surveyed.

Even if your company still does annual raises, the amount may vary from employee to employee. In any case, here are the factors that most commonly influence getting a raise.

Performance is the most common factor in determining whether to grant an employee a raise and for how much. While it is always expected that you will work to adequately do your job, employees who go above and beyond—say, exceeding sales goals or doing exceptionally well on an important project—may be rewarded in the form of higher pay commensurate with this performance.

Another common factor that can lead to a raise is a change in job duties. If you recently took on more responsibility, absorbed additional duties from someone else, or if your role shifted from what you were previously doing, this may be grounds for a corresponding bump in salary.

The market—a.k.a. what similar employees at other companies are paid—can heavily influence how much you make. This can work both for and against you. If you discover that you are being underpaid compared to the market, this can help you make a case to your boss for a raise. If you are already being paid more than what is average for the market, however, you may have a tougher time justifying a pay increase.

Amount of Time Since Your Last Raise

Sometimes, you are not a good candidate for a raise simply because you received one too recently. Some companies even have policies for how much time must pass between one pay increase and the next. While this can be frustrating, it is certainly something to bear in mind if you are preparing to ask for a raise or wondering whether you might get one soon.

What Is The Average Raise Percentage?

Not all raises are created equal. Here is how much more you can expect to take home for three different kinds of pay increases.

Average Raise Percentage for a Cost of Living Increase

If your salary simply remained the same from year to year, you would actually be making less money with each passing year (assuming that inflation continues to increase, as it historically has). A cost-of-living increase is meant to offset the impact of inflation on employees’ wages.

Social Security benefits are a good marker of the average cost-of-living increase. In 2019, for example, Social Security recipients saw a 2.8% increase in benefits. This is simply meant to help their income keep pace with inflation. Not every company provides cost-of-living raises, but for those that do it typically falls between 2 and 3%.

Average Raise Percentage for a Promotion

According to a 2020 review by the Bureau of Labor Statistics, the average raise for a performance-based promotion is 3%. If your previous salary was $40,000, that would put your new one at $41,200. This type of pay increase is usually associated with a bump in job title, like moving from account coordinator to account specialist.

“But wait!” you might be saying. “That is hardly more than the average cost-of-living raise,” and you would be correct in noting this. This is a pain point among employees, especially those who simply take whatever raise they are offered or worse, never actively ask for raises themselves.

This is why it is so important to be your own advocate when it comes to asking for raises and negotiating the amount of the raise. Deserving employees who make a strong case for a raise—which we will talk more about in a moment—can often secure pay increases ranging from 5 to 10% or more.

Average Raise Percentage for a Bonus

Bonuses are another type of merit-based pay increase, but rather than being factored into your salary and included in your regular paycheck, a bonus is a one-time payment on top of your earnings.

The amount of the average bonus can vary widely depending on the company and industry. In some fields, like sales, bonuses are tied directly to your sales figures, while others are based on the company’s earnings for the year. Still, others are given around the holidays as a show of the company’s appreciation.

Bonuses can range from a token amount, like $100, to above 100% of a person’s salary, as is the case with top executives in major corporations. In most cases, though, bonuses range from around 1% to 5% of an employee’s annual salary.

How Often Should You Get A Raise?

A good rule of thumb for how often you should receive a raise is once a year. This is more than just an arbitrary time frame; there is actually a good reason behind it.

To make the case for a merit-based raise, you should be able to demonstrate a clear pattern of positive, impactful results from your work. It is tough to make a meaningful impact in just a few months’ time, that is why you will have a better case if you document your progress over a more extended period, like a year.

There may be some unique cases where more than one raise in a year is warranted. For example, perhaps you received a positive performance review and were given a standard raise of 3%, but not long after that, your manager left the company and you were asked to step up and take on more responsibility. This might be a situation where it makes sense to ask for a commensurate pay increase within six months rather than having to wait a full year. If you are considering asking for a raise, you will need to use your judgement to gauge whether the timing is appropriate.

As we mentioned earlier, some companies have policies in place that prevent giving raises any more frequently than once a year.

How To Ask For A Raise

If you are intimidated by asking for a raise, you are not alone. A LinkedIn survey found that 39% of American professionals were uncomfortable negotiating pay. However, if you do not negotiate, you can severely limit your lifetime earnings, since what you will make in the future is so closely tied to what you have been paid in previous roles.

Your success in asking for a raise hinges on the strength of your argument. Remember: you are acting as your own advocate. Build a case for why you deserve a raise that is built around the positive impacts you have made for the company. You should be able to cite clear examples of how your work has boosted sales, increased output, retained customers, or whatever business outcomes are most relevant in your job.

Get the timing right

There is a right time and place to ask for a raise—right after the company has undergone layoffs? Definitely not. This might mean you have to wait it out a bit longer or make a move to ask before you are fully ready, but as they say, timing is everything. It Is better to wait three months and get the raise you wanted than to ask too early and get shot down.

Finally, be prepared to name a number that Is both consistent with your performance and realistic for your job title and company. For example, if you are an entry-level employee and this will be your first raise, you are much more likely to have success asking for a 5% raise than if you asked for 20%. If you hold more seniority and play a more critical role for the company, asking for a bigger number makes more sense.

You probably already know that a professional headhunter can help you get a job, but did you know they can also help make sure you get paid what you are worth? When you work with the staffing professionals at 4 Corner Resources, we will help you get through the challenging parts of starting a new job like negotiating contracts and determining salary.

We have more than a decade of experience helping professionals advance their careers through challenging, engaging, and financially lucrative positions with some of the top employers in the country. Get started working with one of our headhunters by sending us your resume today.

Have a question you want to be answered in a future post? Submit it by clicking here.

Stacey Haley is the CFO of 4 Corner Resources, a nationally renowned staffing agency. She has eight years of experience in public accounting as well as seventeen years of consulting in the private sector. As a CPA, Stacey works closely with decision-makers and shareholders for small and medium-sized businesses. Her vast experience varies from debt financing, auditing, cash flow management to mergers and acquisitions. In her free time, she enjoys horseback riding and being outdoors!